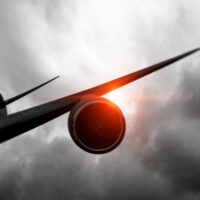 The pilot of a small two-engine plane made an emergency landing in the middle of a busy road in Doral, a city in Miami-Dade County, triggering a heated discussion of liability for injuries and deaths that occur when planes crash or make emergency landings.

Residents were caught off guard on Monday, November 4, after they saw a small airplane make an emergency landing near Miami-Dade Police Department headquarters. When going down on the busy road, the plane hit an Amazon truck and some trees before coming to a full stop.

Luckily, the plane did not injure anyone, but what if it did? Who would be held responsible for injuries and deaths when a plane makes an emergency landing? Our Miami plane accident attorney at Pita Weber Del Prado can investigate your particular case and establish liable parties.

According to CBSMiami, the aircraft was towed away nearly 24 hours after it made the emergency landing on 25th Street west of 87th Avenue. Crews had to cut the wings of the Beechcraft BE-76 and remove the right and left engines to make it safer and easier to tow the plane away from the scene.

Neither the pilot nor his passenger was hurt in the crash. The pilot reported losing power on his right engine, which prompted him to make an emergency landing in the street. The small two-engine plane, which was bound for Miami Executive Airport from Hilton Head, is registered to Osorio Aviation.

The investigation showed that the plane’s certificate is valid through 2022, though state records show that Osorio Aviation Court, the company the plane is registered to, is not active anymore.

The National Transportation Safety Board estimates that the investigation could take up to 18 months to determine liability.

Liability for Injury or Death in Emergency Plane Landing

Who can be liable for injuries and deaths caused by planes making emergency landings in Miami or elsewhere in Florida? The answer depends on the particular circumstances as well as the state in which the incident took place.

It is not uncommon for multiple parties – individuals, businesses, and entities – to be responsible for personal injury and wrongful death stemming from the emergency landing of a plane.

Typically, establishing fault in emergency plane landings requires the help of experts in the field of aircraft operation and maintenance.

Are Plane Operators or Owners Responsible for Emergency Landings?

Depending on the particular circumstances in a plane crash or emergency landing, either the aircraft operator or owner – or both – can be held liable for injuries and deaths resulting from the incident.

The pilot and crew of an airplane – even a small two-engine plane – are required to comply with Federal Aviation Regulations. Failure to do so may result in negligence per se, while a breach of duty of reasonable care on the part of the pilot or crew may entitle the injured party to obtain compensation.

The pilots and crew must comply with Federal Aviation Regulations at all times: during pre-flight checks, take-off, flight, and landing.

The owner of an airplane that made an emergency landing may also be responsible in certain situations. For example, if the owner had control over the operation or maintenance of the plane, and the investigation shows that the negligent operation or inadequate maintenance of the aircraft led to the crash or emergency landing, the owner will be held responsible.

Consult a Miami aviation accident attorney at Pita Weber Del Prado to determine liability in your plane crash or emergency landing. Call at 305-670-2889 for a free consultation.