‘I Got Rear-Ended in a Car Accident in Florida. Who’s at Fault?’ 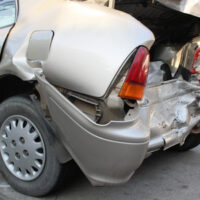 Rear-end accidents are the most frequently occurring type of car crash in the United States, accounting for nearly 30% of all auto accidents in the country. Given that any driver can end up in this type of collision, our car accident attorneys in Miami are often asked, “What should I do if I got rear-ended in Florida?” and “Who’s at fault for the collision?”

While many rear-end collisions are not associated with serious injuries, some accidents in which a vehicle crashes into the back of another vehicle may entail considerable financial losses and damages.

In fact, just because you feel fine following the rear-end accident does not necessarily mean that you were not injured at all. Often, car accident injury symptoms are delayed, which means your injury could manifest itself days, weeks, or even months after the rear-end crash.

Seeking Compensation in a Rear-End Car Accident in Florida

Since Florida is a no-fault state, people who were injured in rear-end crashes and other car accidents must seek compensation from their own insurance company. What that means is that you do not need to prove that the other party was at fault for causing the crash. All you need is to file a claim with your own insurer.

Depending on the severity of your personal injury, you may be able to pursue compensation against the other driver involved in your rear-end accident. In Florida, you can file a liability claim against the other party if (a) they were negligent and (b) your injury is considered serious.

Proving Negligence in a Rear-End Collision

In Florida, you need to prove the following four elements of negligence to recover damages after a rear-end collision:

In most rear-end collisions in Florida, the motorist in the back is almost always deemed negligent in causing the accident. Typically, negligent drivers cause rear-end crashes due to speeding, tailgating, failure to maintain a safe distance, and distracted driving.

Although the driver in the back is almost always at fault for causing a rear-end crash, you may still be partially at fault for the collision if your own negligence contributed to the accident. Since Florida follows the doctrine of comparative negligence, your percentage of fault will reduce the amount of compensation that you are entitled to.

In rear-end accidents in Florida, examples of comparative fault are:

If you are deemed partially at fault for the collision, your compensation will be reduced by the percentage of your own negligence. Speak with a Miami car accident attorney at Pita Weber Del Prado to establish fault in your rear-end crash. Call at 305-670-2889 for a case review.

By Pita Weber & Del Prado | Posted on September 23, 2020
« Redemption for Truck Driver. PWD Recovers $275,000
How is Fault Determined in Shoulder of Road Accidents in Florida? »