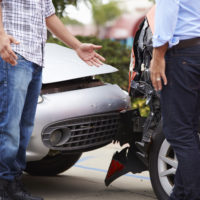 Experiencing an automobile accident is often a surreal experience. Although many accidents occur at a high rate of speed (which, in some cases, is the cause of the accidents), many operators note that time seems to stand still as they experience the oncoming accident. Another type of automobile accident is where an obstruction suddenly appears in the pathway of the automobile. In these cases, the operator may not have enough time to turn out of the accident, even if travelling at a manageable rate of speed. An example of these types of accidents occurs when the automobile collides with livestock, whether by travelling at a high rate of speed and coming into contact with the livestock, or when livestock jump into the pathway of the automobile. In either case, damage to the automobile, and possibly to the driver and any passengers, is likely to occur, and retaining the services of an experienced personal injury attorney is crucial to ensuring that the costs associated with any damages is reimbursed. In West Melbourne, three injuries resulted from a multiple automobile accident involving cattle, who somehow escaped their enclosures. While the article does not discuss liability for the injuries, one question that must be answered is who, in fact, is responsible in these situations for the automobile accident?

In situations like this, where injury was caused through the fault of one or more individuals, negligence is the legal theory used to claim recovery. Generally, negligence holds that an individual is liable for injury to another if he/she caused, through action or inaction, a condition to exist which led to the injury. In legal terms, to be successful in a claim for negligence, an injured individual must prove the following elements:

In conjunction with this legal theory, Florida follows a comparative negligence model, which holds that the damage award may be reduced by the percentage of fault that can be attributed to the injured individual. In other words, if it can be shown that the injured individual was 25 percent at fault for the accident, then his/her damage award would be reduced accordingly.

If, however, the animal is owned by another individual, the law generally holds that the person responsible for keeping the animal is liable in situations in which his/her negligence caused the accident. In many cases, the person responsible for keeping an animal is the owner, such as a cattle farmer who leaves a gate open. However, in some cases, the owner may not be responsible. For example, the owner of a horse who, as part of boarding the animal at a stable, entrusts the stable to maintain the horse, would not be held liable if a gate was left open – that would fall to the stable.

Importantly, though, there must be an act of negligence by the responsible party to hold him/her liable. In other words, the responsible party must know, or should have known, that the animal was in a position to cause injury to another and failed to take action to correct that condition. However, in some cases, such as when an animal is repeatedly found roaming outside an enclosure, the responsible party will be inferred to have this knowledge.

If you have suffered bodily harm as a result of an automobile accident, and especially in one in which livestock was involved, contact the experienced Miami car accident attorneys at Pita Weber & Del Prado as soon as possible. The attorneys at our office have many years of experience in such unique personal injury matters. After analyzing your injury, if we believe that you may be able to obtain reimbursement from another party, we will develop a strategy to claim the highest possible amount of compensation for your injuries. Contact our Miami office today for an initial consultation.

By Pita Weber & Del Prado | Posted on May 11, 2019
« Who Is Responsible for Drug-Related Injuries?
Proposed Changes to Florida’s PIP Laws »