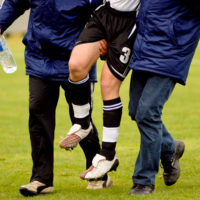 Playing sports a normal part of many people’s childhood. With football, soccer, baseball, and basketball, as well as other sports, a child can spend a considerable amount of his/her time on the field. While sports do teach children valuable lessons in teamwork and personal responsibility, they also come with risk – the risk of injury. If an injury occurs while on the athletic field, it may be necessary to retain the services of an experienced personal injury attorney to help ascertain whether the person or entity responsible for the injury can be held liable for the child’s injury. Recently, Florida State University Head Football Coach Willie Taggart was sued for an injury to a player that occurred during his time as Head Football Coach at the University of Oregon. The player alleges that the University failed to monitor Coach Taggart’s physical punishment regimens, and that the coaches improperly led the players through intense workouts, resulting in rhabdomyolysis, a condition caused by overexertion which causes the release of muscle contents into the bloodstream. A discussion of the legal theory these types of allegations are based upon, as well as some practical issues in these lawsuits, will follow below.

Negligence is the legal theory upon which a claim for personal injury is commonly based. To succeed in such an action, the injured plaintiff must prove the following elements:

Participation in sports is voluntary. As a result, in the vast majority of cases, a coach will not be held liable for a player’s injuries. In many cases, the participant, or his/her parent, signs a waiver stating that they understand the risk involved in playing that particular sport. Consequently, it is the participant, and his/her parent, who shoulder the cost of recovery from injury in most cases.

Nevertheless, it is possible for coaches to be held liable for an injury suffered by a sports participant. As alluded to above, the coach does have a duty to keep his/her players reasonably safe from farm. Thus, if it can be proven that the coach conducted himself/herself in an inappropriate manner, or used an unauthorized coaching technique, then he/she could be liable. This can manifest in some of the following common situations:

If you or your child have suffered an injury, and you believe the injury to be the result of a negligent act of the athletic coach, and are curious as to what damages you can potentially recover, contact the experienced personal injury attorneys at Pita Weber & Del Prado as soon as possible. If, after examining the particular circumstances at issue, we believe the coach or another entity acted inappropriately, we will fight for the compensation you deserve. Contact our Miami office today for an initial consultation.