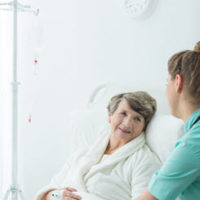 Picking the right nursing home for a loved one in need of constant care and monitoring is an extremely important, but difficult, decision. Picking the wrong facility could lead to nursing home abuse or neglect, which is every family’s worst fear. Many considerations factor into the final decision, including cost, location and doctor referrals. Further, the preferred facility may not have an open bed when the elderly or disabled individual is ready for transfer. As a result, the resident and the family may feel pressured into signing a contract before being sure a particular home is right place. Unfortunately, even if the seemingly perfect nursing home has availability, the facility holds practically all the bargaining power over the terms of the resident’s stay, including how to resolve disputes. The vast majority of nursing home contracts include a standard provision requiring all disputes to be settled through arbitration in place of a traditional lawsuit. Arbitration puts the resident and his/her family at a disadvantage when issues arise. While the Florida Supreme Court spoke on the issue of arbitration clauses last year, the U.S. Supreme Court is currently considering a the validity of these arbitration clauses on a nationwide level. Several justices indicated they could view arbitration clauses in the nursing home context as invalid since these arrangements involve a person’s care and not merely money lost. An overview of what arbitration is and how it negatively affects legal claims will follow below.

Arbitration is an alternative dispute resolution process used to decide legal disputes outside of court, and is preferred by many companies because it results in lower legal costs and keeps the proceedings private. At least one, and often a panel of three, neutral arbitrators will decide the outcome of the dispute. These individuals are typically selected by the consent of both parties, but companies that use arbitration clauses may include terms that control how selection is made. The decision of the arbitrator is final and binding, and the ability to appeal an unfavorable result is limited. The proceeding itself is somewhat similar to a trial, as there are procedures in place that regulate when and how evidence is submitted and testimony is offered. Arbitration is much faster than traditional litigation, and as noted above, records of the proceedings and the final decision are not open to the public, which can be important if sensitive personal information is a central issue.

How It Hurts Injured Parties

While using a process that is faster, cheaper and private may sound like a good idea, injured parties face a number of disadvantages when an alternative to litigation is used to decide a dispute. First, arbitration awards are almost guaranteed to be much less than the amount a jury would grant, and punitive damages, which are used to punish reckless defendants, are entirely unavailable. Further, if the provisions of a nursing home contract constrain the available list of arbitrators, the facility can use arbitrators that tend to favor the nursing home over the injured party, making it more difficult to win. In addition, the types of evidence permitted in arbitration sessions are usually restricted, as compared with what a court will accept, and any limitation on the introduction of evidence makes it harder to convince the arbitrator one party’s argument is correct. Finally, by keeping the content of arbitration proceedings private, the nursing home has no real incentive to change negligent practices because the public never learns about the unacceptable behavior, leading to the likelihood that more individuals will be hurt. Privacy also deprives the injured party of the vindication felt when hearing a jury find the nursing home responsible for the harm experienced.

Talk to an Lawyer

Nursing homes are entrusted with the responsibility for the care of vulnerable individuals, and if a facility failed to fulfill this obligation, you may have grounds to sue. The Miami law firm of Pita Weber & Del Prado has substantial experience with nursing home abuse claims, and understands how devastating these injuries are. The lawyers at Pita Weber & Del Prado will aggressively pursue your case so the nursing home is held accountable. Contact us for a free consultation.

By Pita Weber & Del Prado | Posted on April 28, 2017
« Doctor’s Liability in Emergency Situations
Who Is Responsible When Driverless Cars Cause a Crash? »